“We no longer have to spend VND500,000 per month on a gas tank for cooking and daily needs. Since we have received support, including breeds and animal feed, as well as in the construction of biogas cellars, we are not only able to use clean energy and save money, but also have high-quality pig herds in the future,” said Hoang Thi Xin, from Ha Tranh Village, Cong Hoa Commune, Cam Pha City, Quang Ninh Province, took us to visit her family farming model.

Enhancing use of clean energy 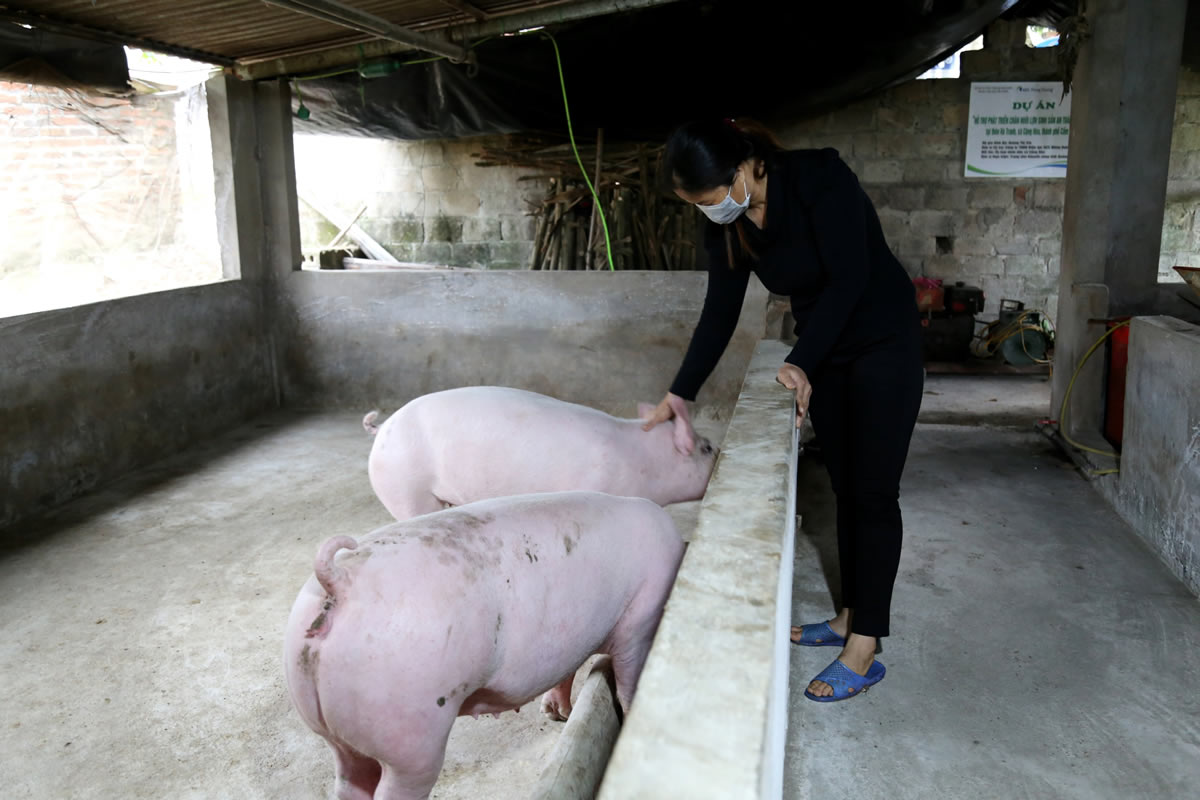 Previously, although Xin’s family raised more than 10 pigs, her family had to pay for a new gas tank every two months. “At current prices of VND520,000 per gas tank, it is not a small sum for farmers like us. Moreover, in order to treat the wastewater and dung discharged from the pigs, I must compost and grow a lot of vegetables in the field behind the house. However, little waste is reused and the foul smell is unavoidable, especially when the weather is humid and windy.”

Since participating in the biosecure breeding pig farming model with dry, ready-made feed for pigs, whenever the piggery is cleaned, the dung and wastewater will go directly to the biogas cellars provided by AES Mong Duong. Through the process of decomposition and heating, the dung and wastewater become a source of clean energy. “With only two pigs provided by the project we are able to generate 12kg of gas, which is enough for our daily lives. Whenever it runs out, it will be refilled. We sometimes don’t use it all and must release some gas,” Ms. Xin explained.

The gas is pumped to the kitchen through heat-resistant pipes and generates a strong, green flame. Households no longer have to place dangerous gas tanks in their homes, improving safety for the local community.

According to Mr. Bang Minh Quang, the local Party secretary and head of Ha Tranh Village, many households have long hoped for such a solution. 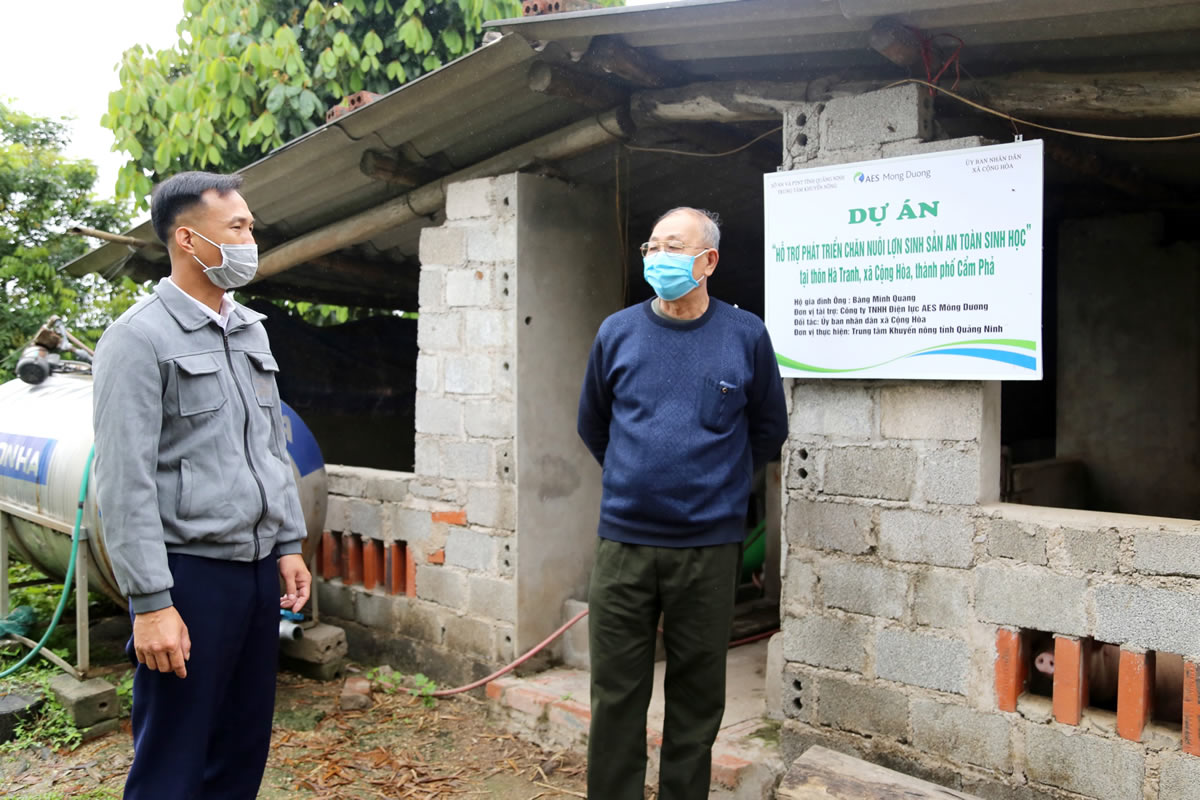 As Ha Tranh was originally a pig farming area with many large-scale farming households, farmers have experience in maintaining piggeries. However, due to the impact of African swine fever, many households were unable to recover their herds. Therefore, the idea for the project was put forward during a quarterly meeting at the end of 2019, held between representatives of AES Mong Duong and the leaders and residents of Cong Hoa Commune.

“At first, I thought that AES Mong Duong would provide the breed and then farmers would raise pigs on their own. However, workers from AES Mong Duong coordinated with the Agricultural Extension Center of Quang Ninh Province, to set up a support program that was methodical and closely supervised. After nearly a year of implementation, the pigs have grown and developed well. The project is expected to produce high-quality f1 pigs in the future,” Mr. Quang said.

When selected to benefit from the project, farmers in Ha Tranh were confident in raising their pigs in the most productive and effective manner.

Mr. Diep Van Ngoc, a farmer participating in the project with more than 30 years of experience in pig farming, took us to visit his family’s pigs. “One pig has mated, and we are waiting for the results, while the other is about to enter the cycle. This type of pig is productive, and it does not take as much time as a traditional pig. In terms of appearance, these pigs are also quite strong and lean, so they are preferred by merchants. Currently, my family’s two pigs weigh about 2 quintals and are 1.7m long,” Mr. Ngoc said. 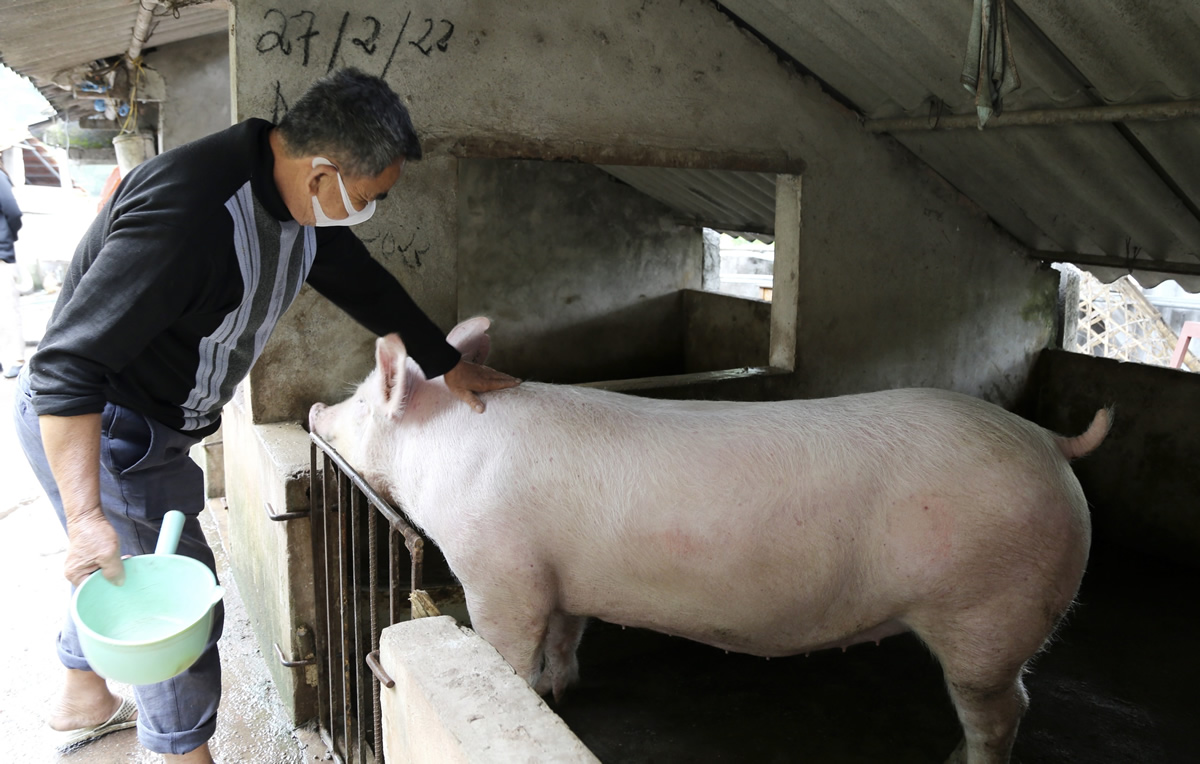 Farmers in Ha Tranh Village previously learned about pig raising by themselves, then gradually developed and invested in expanding herds from their own experience and other farming households. Therefore, when they are provided not only with breeds and feed, but also regular guidance from veterinary staff, for them, it really is meaningful.

“Every month and quarter, veterinary staff from the Provincial Center for Agricultural Extension visit and give the farmers advice. During the breeding process, if there are any problems, they are willing to listen and offer solutions. When there is any demand for mating, they also go to the herds to carry out the insemination. Therefore, the farmers feel extremely secure. Everyone is determined to better take care of the pig herds and breed them well, to ensure a source of regular income for the family, and also to not waste a source of clean energy,” said Mr. Hoang Van Thu, Deputy Secretary of the local Party and Deputy Head of Ha Tranh village. 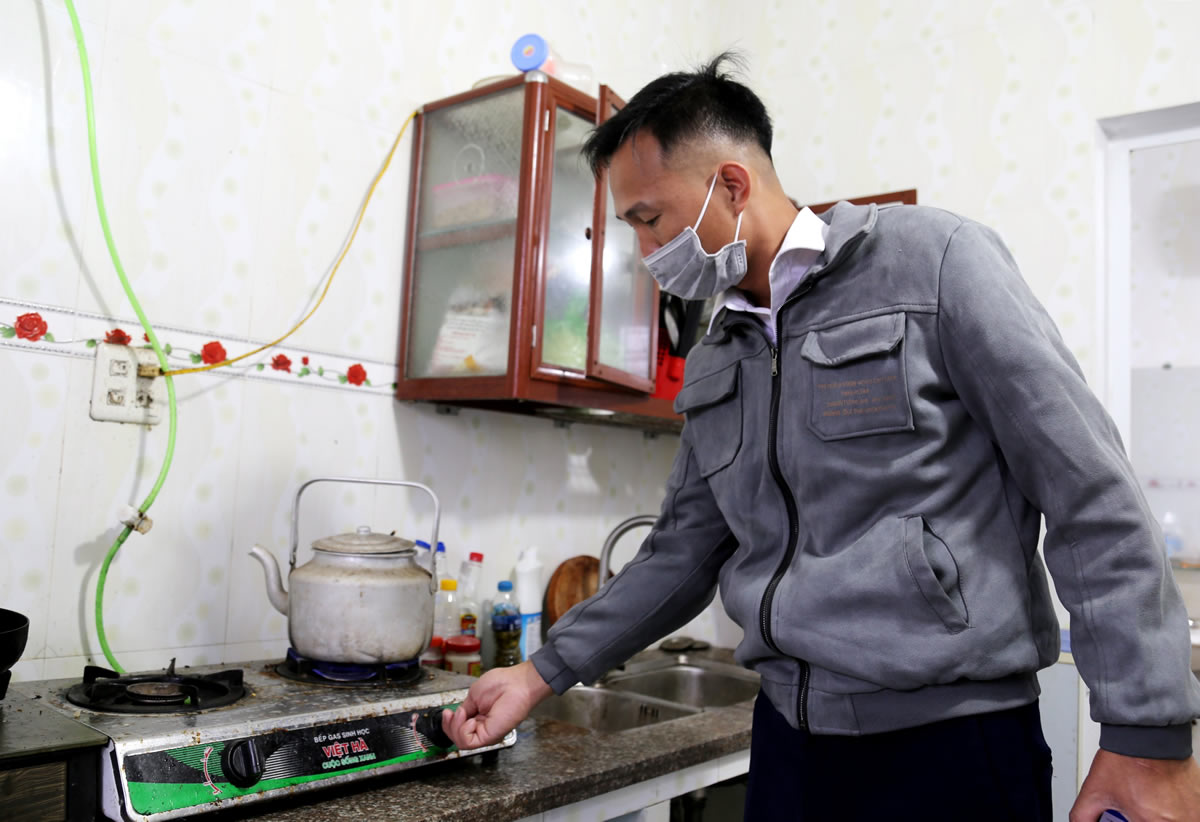 “We hope that the support will open up opportunities for the local people to improve their livestock skills and income; at the same time, further expand the use of biogas as a renewable energy source for cooking and lighting in rural areas,” said Mr. Johnny Tanis, Director of Mong Duong 2 Thermal Power Plant.

This is the ultimate goal of the project – forming stable livelihoods for the farmers who are struggling to develop their skills. When the farmers are provided with adequate supplies and training, not only do they avoid wasting manpower, but are able to make full use of the available resources like land, as well as their valuable experience. It is also important to create an organic source of energy, obtained from the same livestock process, to minimize waste discharged into the environment. This will be the driving force to attract households that are not yet eligible to participate in the project and help them develop the household economy. The project helps to increase the income of farmers and improve their local environment, contributing to ensuring fuller, safer lives for the community.