On 18 April 2018, AES Mong Duong Power Company Limited was honored as #14 in top 500 Prosperity Company in Vietnam (BP500). The announcement ceremony of BP500 in 2018 was held in the National Convention Center and honor to receive the participation of the representative of the Ministry of Information and Communication and Department of Finance and the People’s Committees of provinces and more than 300 representatives from the largest enterprises in Vietnam namely C.E.O Group, AES Mong Duong, VinGroup, Delta, EuroWindows, Saigontourist, Honda Vietnam, FrieslandCampina, FLC Resource, etc. 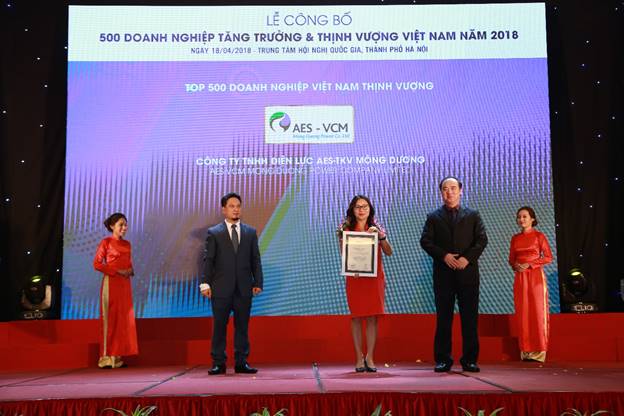 Ms. Le My Hanh, Stakeholders Manager of the Company, honored to receive the award.

BP500 was launched in 2016 to recognize Businesses that represent good business operation and high potential growth, constantly inquiring, creative and strive for excellence in business with social responsibility, thus contributing significantly to the development and prosperity of the country’s economy. The criteria for selection and ranking is based on independent research and assessment according to international standards of Vietnam Report, and are published annually by VietnamNet, with the assistance consultation of domestic and international experts and advisory committees.

The news was widely reported on national newspapers and television which increase the reputation of AES Mong Duong.